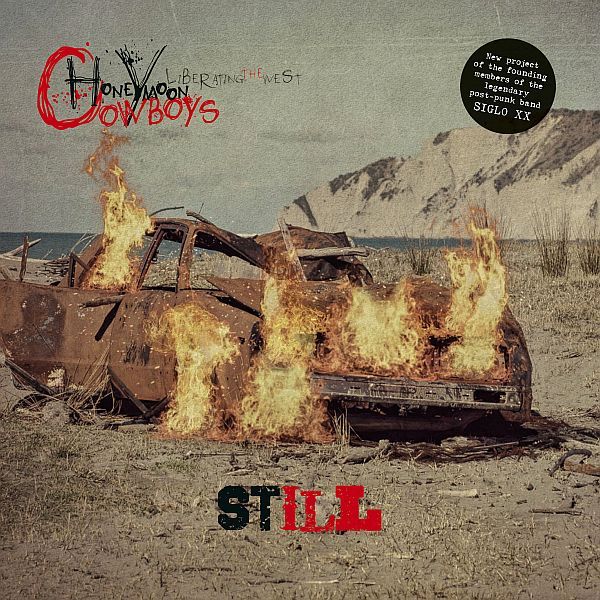 Honeymoon Cowboys … Liberating The West! Dark and gloomy sounds from the wild west with great passion and a touch of joy. Honeymoon Cowboys are a Belgian band formed by Antonio Palermo (guitar) and Klaas Hoogerwaard (drums), both previously apart of Siglo XX, together with Tom Van Troyen (vocals) of Spiral Of Silence, Kris Dries (bass, guitar), and Thomas François (keyboards, piano). Kris played additional guitar on the Lords Of Acid‘s Voodoo-U album (1994) and was also involved in several bands like De Krabbers, Fruitcake Freddy, and John Tennis as singer, bass guitarist, and guitar player. Thomas has played in several bands. He was the front man of Blue Train (blues rock), best known in Genk, and also plays in The Pundits, a neo-sixties band with songs that are inspired by the ’60s. Siglo XX is still one of the most renown Belgian post-punk (cold-wave) bands of the ’80s, who, soon after the release of theirs first release, the 7″ The Naked And The Death (1980), gathered a strong following in and outside Belgium. With their atmospheric, yet energetic live shows and dark sounding vocals, they quickly earned themselves a real cult-status while the press respectfully referred to them as « The Belgian Joy Division« . After several releases on the Belgian cult label Antler Records, they signed to PIAS (Play It Again Sam) and released six more albums. However, after the release of their last studio album Under A Purple Sky (1989), the band became inactive at the end of 1991. Most of their releases became hard to find, and expensive, collector items. Today, more than 25 years later, Siglo XX ex-members formed Honeymoon Cowboys. Dark rock sounds, with a gloomy touch due to the piano/synth, makes a direct bond with the latest period of Siglo XX. It’s as if Honeymoon Cowboys have pursued the legacy where Siglo XX left it. Still is their new album.