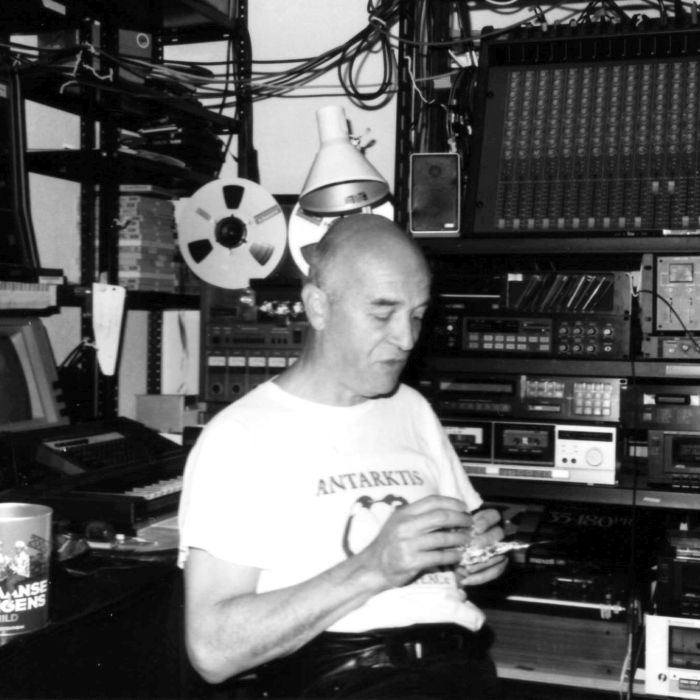 Conrad Schnitzler (17 March 1937 – 4 August 2011) was a prolific German experimental musician focussing on abstract electronica and multimedia. In 1968 he founded the Zodiak Free Arts Lab in Berlin and became an early member of Tangerine Dream (1969–1970). The first musical projects that Conrad Schnitzler started were “Geräusche” and “Kluster” (1970, together with Dieter Moebius and Hans-Joachim Roedelius) which formed a contrast to the existing hippie-movement at that time by concentrating on new musical forms: authentic electroacoustic sound-lava produced by organ, tone-generators, drums, flute, amplifier and tape-echo-machines. Since 1971 Conrad Schnitzler began his musical solo-career and produced countless innovative and outstanding albums until his death, always avoiding harmonies or traditional song-structures. Especially the first three albums “Schwarz”, “Rot”, “Blau” (produced between 1971 and 1973) entered new territories in sound-design and still sound fresh and timeless. These albums involved recordings with the legendary EMS-SYNTHI A … an ideal tool to generate swirling tone-clusters and outlandish pulsating tracks like “Meditation” or “Jupiter”, far ahead of his “colleagues” in Berlin.

Siegmar Fricke alias Pharmakustik (born 02 May1968) contacted Conrad Schnitzler in 1984 after having read an astonishing article in the German magazine “Oldie Markt” which dedicated a whole biography and discography to the artist who collaborated with Joseph Beuys in the sixties. Fricke started his earliest musical experimentations already in 1981 with musique-concrète combining short-wave sounds and magnetophone-treatments. Until today many Pharmakustik-items have been released on vinyl, CDs and download-format.

“Kontraktion” and “Extruder” albums, are the result of two long sessions that have been recorded on tapes by Conrad Schnitzler and Siegmar Fricke in Con’s former studio Leberstrasse in Berlin. The five soundscapes (produced in November 1986 and July 1987 with EMS-Synthi A, KORG MS 10+20, delays) contain all the machinistic energy and infernal industrial sound-eruptions similar to Conrad’s first three albums “Schwarz”, “Rot” and  Blau” and to the rumbling train-wheel-rhythms of “Zug” (from the CON-album 1978). In addition “Kontraktion” carries the spirit of the first album by Cluster (released on Philips in 1971) due to the imposing bruitiste elements of uneasy sci-fi atmospheres. In 2014 the long sessions on tape have been edited, restructured and recombined by Siegmar Fricke at Pharmakustik-studio Germany and have now become a powerful milestone…30 years after they have been recorded.